Forever my mum, always my friend 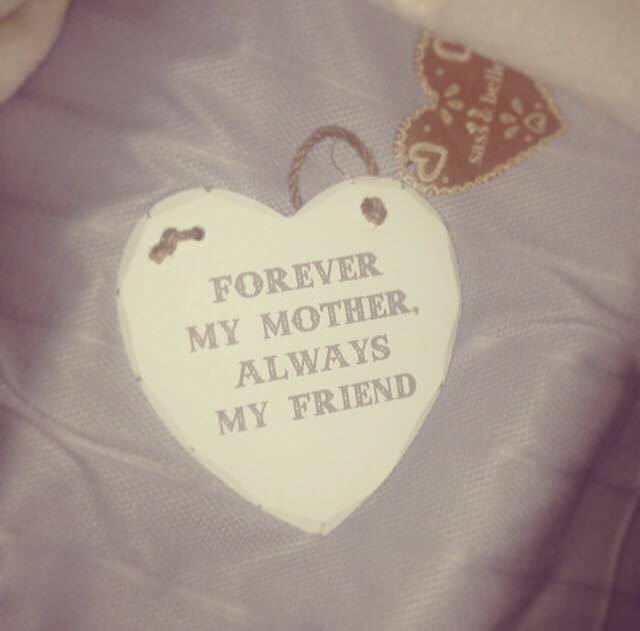 In this guest post, a very special young woman shares her experience of losing her mum, in the hope that it will help others see through the chaos and confusion that follows death. She has requested to be kept anonymous as she continues to heal.

It all began in 2013.  A year into my PhD, my mum calls me from home to tell me she can’t see properly and is too scared to call an ambulance for help. After an hour’s drive, I find her shivering on her doorstep waiting for me, unable to recognise I was there despite my worried, reassuring voice telling her I was there and we would sort it together. That was the way it had been for as long as I can remember, me at the end of the phone for any problems my mum had. Little did I know that that would be start of things only increasing in pressure, with a confirmed brain haemorrhage resulting in loss of sight and some short term memory problems.

We got through it, and everything that came as a result of the diagnosis, including the depression and suicidal feelings she regularly experienced. I suspended my studies for 12 months as a result; I couldn’t continue to answer her calls in the corridor of my office on placement to tell her it would be okay and not to act on her thoughts. My mum and most of my family still do not know that I made this decision, but I know there was no other way. A stroke had taken away the mother I knew, and we now needed to learn how to adapt to this sudden, unexpected life-changing event together.

I returned to my studies in November 2014. A year later to the day, my life was going to be turned around for the second time. I took a day off from placement to support my mum at court for a matter resulting from a contract she had signed when she had poor vision. The legalities of it didn’t concern me. What did matter was ensuring my mum didn’t get too stressed with the pressure, so we sat in court whilst I told her what she always told me: that we are “strong, independent women”. That evening, I had a volunteering commitment at university and an interview to prepare for the following day for my next placement, so I ensured that she was at home safely and had everything she needed. You can probably tell from my explanation of this day that I feel I should, and could, have done more.

I don’t know how I made it to the hospital

At this point, we spoke at least twice a day, so while on my journey back up the M1 to the interview I called to check how she was doing following her early night and to organise a coffee for after my interview. Anyone that knew my mum knew how she loved a joke – she’d been a singer/entertainer for most of her life so when I made that call, and a woman answered saying she was from the hospital, part of me hoped this was another of my mum’s silly jokes.

It wasn’t a joke

She had been found by her neighbour earlier that morning following another haemorrhage. I never made it to the interview. To be honest I don’t know how I made it to the hospital. I was met by the sister of the ward to be told they weren’t hopeful and that the pneumonia she had (as a result of being outside for over 12 hours) was enough without further trauma from the haemorrhage. My dad had met me at the hospital; even though they hadn’t been together for many years they had maintained a friendship, but my dad couldn’t face sitting there with her so he said he needed to get back to work. I found myself telling her again how we needed to be strong, independent women. She wasn’t going to leave me that easily.

How could I? I had fought to keep her going since the first haemorrhage, and I wasn’t going to give up on her now

I’ve got an older brother and sister. They met me at the hospital, and both informed me that I would be mum’s next of kin as I would know her wishes better. It was true, but at 25 years of age watching an unresponsive mother in intensive care with tubes keeping her alive for seven nights, I questioned how I was going to keep putting this front on. Most days, I was told by the nursing staff to go home. How could I leave her alone, when she wouldn’t have left us as her children there alone? She began talking again after a week, and we started to get some movements back and I tried to be hopeful for the future ahead.

A brain haemorrhage is so different to a lot of other life changing health issues, where you are never certain of the outcome of the damage and you return to the hospital each day hopeful of some improvement. She returned to the stroke ward, and we had some battles along the way but importantly, she was with us and fighting on. One memory that will stick with me through those weeks was how she was unable to eat and drink, due to being unable to swallow. She always loved her tea, and would not understand when I had to explain why I couldn’t make her one.

I was then asked by the medical team to explain to her that she needed a procedure to keep her alive, which she was rejecting when told by the consultants. I pleaded with her, questioned her abilities to decide with the medical team and was asked to return the next morning at 8am to persuade her – the operation was scheduled for that afternoon. A stubborn mum was having none of it, turning to me and saying ‘let me die’. How could I? I had fought to keep her going since the first haemorrhage, and I wasn’t going to give up on her now. Eventually she accepted the treatment, continued requesting tea for the remainder of the month, and in December was transferred to a specialist stroke rehabilitation unit in the hope of improving her swallowing, walking and talking.

Things were improving. I’d gone from having an unresponsive mum with very little chances of survival, to a mum moaning about the Emmerdale storyline along with her lack of tea! My brother and sister visited her as often as they could, and my dad would visit with me some evenings. I kept imagining the day she could return the stroke ward and have her usual giggle with the nurses that had cared for her.

On the 18th December I decided to take the evening away, and return to university to spend an evening celebrating a friend’s birthday. My sister was visiting her that evening. At 1am, sat in McDonalds whilst everyone had a post-night out snack I received a call from Ben, an A&E resus nurse, saying that I needed to get to the hospital as my mum had had another haemorrhage. Driving back up that M1, knowing what I had faced twice before and replaying the tone of Ben’s voice felt like the longest and loneliest drive. Ben stayed with me, my mum and brother that evening. I cannot imagine the job he does.

Being next of kin at 25 years old

As next of kin, I was presented with a ‘do not resituate form’ to sign.  I remember asking Ben if this meant I was signing to say I was okay with her going, because I think it was clear to everyone that I wasn’t. My mum battled on for a further three days, with me questioning the medical team on their decisions not to give her medication, food or water. I visited the sister who had met me that day in November, and asked that she accept my mum back on the ward to be cared for by those that she knew well and within the hour this was granted.

I knew that was it. She’d gone

I barely left her side through those last days, hopeful to see some signs of change. My dad sat with me throughout the night of the 21st, outside the room as he was too upset to see her the way she was. I played her some of the songs she had sung many a time, and told her that it would all be okay. My dad returned to work that morning. My mum’s friend asked to come and see her, and I used that as my opportunity to go have a quick shower. I’d been gone less than an hour, when a nurse called to say that I should return. Greeted again by the sister of the ward, I knew that was it. She’d gone.

Arranging a funeral and clearing her home was a lonely task, but it needed doing. Her recordings of her songs led her into and out of the main church in our town, and people shared their own stories of my mum. I had to return to placement two days later at the request of the course director.

I’m sharing this story in the hope that someone will find comfort in knowing that they aren’t alone in the processes they have to go through when a close family member passes away. I have amazing friends, some I speak to every day and some who I know are at the end of the phone anytime I need them. None of them know this story, through no fault of their own. I know from the work I do counselling others that it is crucial to share your stories with others, but how do you begin telling someone my story? I had to inform my mum’s friends of her passing, so I became familiar with that – but speaking about my experience and the impact of losing mum is still incredibly difficult. I am only just starting to come to terms with it all myself.

I recognise that I am lucky to have spent 25 years with my mum – some of those reading this may not have. I also know that others have navigated more traumatic ends to the lives of family members. What we can be certain of is that everyone’s story is different and the effects of loss will be different for everyone. Bereavement causes a serious emotional impact. I am lucky that in my job I can support others through this time.

My mum will always be around. She remains in my list of ‘favourites’ on my iPhone, and when I’m feeling strong there is nothing better than listening to one of her songs with a lovely cup of tea.